This week was spent icing cookies and petting puppies galore at a local Pet Fest – a perfect week, if you ask me! On the other hand, I hit a bit of a snag with my reading. In a rush to finish my month old stack of library books, plus trying to fit in some new Net Galley reads, I just couldn’t decide on any one book and ended up switching back and forth between five. Not the best system, but I did manage to finish a couple this week, including one of my Readathon picks, What’s a Ghoul to Do by Victoria Laurie. I just couldn’t wait any longer! 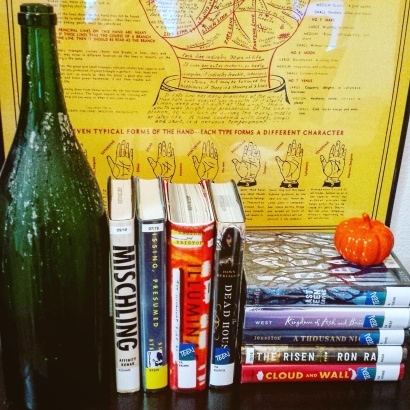 Currently, I’m reading Illuminae by Amie Kaufman and Jay Kristoff – what a thrilling read! I can’t believe it took me so long to start!

The Couple Next Door by Shari Lapena

A shocking new thriller, The Couple Next Door follows the chilling abduction of Anne and Marco’s six-month old baby girl, as a seemingly innocent night leads to tragedy. After the baby sitter cancels last minute, the couple decide to go forward with their dinner plans and besides, they’ll only be next door. bring the baby monitor and check in on her every half hour, what could go wrong? But returning home, Anne finds the front door cracked open and their beloved child gone without a trace. With little evidence and rising suspicions, tensions quickly rise as shocking secrets are revealed and a family left undone.

“The wife is always the last to know, right?”

As a previous Book of the Month Club pick, I had pretty high expectation going into my reading, but even with the novel’s provocative twists and turns, I was left disappointed. The novel is full of decept, and not just from the main characters, from neighbors to investigators to the parents themselves, no one seems to tell the truth, or at least the whole truth. And yes, while the beginning premise of the novel is shocking, parents leaving behind a near new born for dinner and drinks next door, it’s definitely over played while following twists are abandoned right after the reveal. The most interesting point of the novel was the dynamic between Anne and Marco. Even after the first big reveal, their rocky relationship surprisingly remains intact, but after lying to each other for so long, what’s one more? Of course relationships are never quite realistic in their portrayal throughout the mystery genre, but it felt like a missing piece throughout the novel when so much of the investigator’s work was wound around the family. Overall, shocking but not jaw dropping in my book.

A two-book novel, Replica explores the horrifying secrets behind the mysterious research facility Haven, auspiciously located on a deserted island off the coast of Florida. After repetitive illnesses as a child, in and out of hospitals over the years, Gemma’s parents keep a close watch. Between school and home, she rarely spend a moment to herself without a pair of peering eyes overhead, but after a seemingly harmless prank scares her parents into cancelling her spring break plans, coincidently timed with new allegations against her father, Gemma will stop at nothing to reach Haven in order to uncover the truth, no matter how dark the consequences. Meanwhile, Lyra has spent her entire life at Haven. Known as Subject 24, she’s under constant surveillance and a tight schedule of medical and cognitive testing, until a window of escape presents itself. Now, after a chance encounter, the two pair up to uncover earth-shattering secrets that will change their lives forever.

“A strange and baffling truth: that the people we’re supposed to know best can turn out to be strangers, and that near strangers can feel so much like home.”

First, a few tips on how to read the book(s). Though you can easily read one book at a time, I think the best option is to read both stories together, flipping back and forth, preferably beginning with Lyra and ending with Gemma. I ended up reading 4 chapters of each story at a time and ended with Lyra, but I wish I’d ended on Gemma’s story – hers felt like the end all, be all conclusion (it’s also followed by the author’s bio page, which also hints at it being THE end).

“They would face it together, as they were then: turned human by joy, by a belonging that felt just like freedom.”

Replica was one of the most enthralling reads I’ve enjoyed in some time, full of action, romance and mystery. Starting with the girls, reading both Gemma and Lyra felt like I’d taken a step back to visit my teenage self – Oliver definitely knows how to write teenagers, but that’s where they started to fall flat for me. Above the common teenage fears, “I’m different, no one’s going to like me” or “who am I really? who do I want to be?”, there was little focus on actual consequences. Especially in the conclusions, both ending on romance rather than a “we’re saved!”. It felt like a bit of a cop-out ending, even if it’s a planned series there could be a hint of an open ending to show where the story might lead rather than firmly confirming that yes, both girls got the boy. That aside, I couldn’t help but fall for Pervy Pete! He’s quirky, and somehow awkward but smooth at the same time. He makes the perfect knight in shining armor, ready to take charge into the unknown (literally) and always reassuring Gemma when she needs it. Plus, he makes a perfect foil to Subject 72 (Lyra’s love interest) who is just now learning about the outside world, struggling to define himself as a Replica or a human, and trying to distinguish what that even means. He has a lot on his plate right now, just like Lyra, and unlike Gemma and Pete, they make the perfect team, always working together and equally leaning on each other for support. While much is revealed about Haven and the girls, I think we still have a lot more to uncover in the next installment. I can’t wait to see where the story leads! Will they make it home? And, if they do, how is Gemma’s dad going to help Lyra?

What have you read lately?

One thought on “Weekly Reads: Week 41”