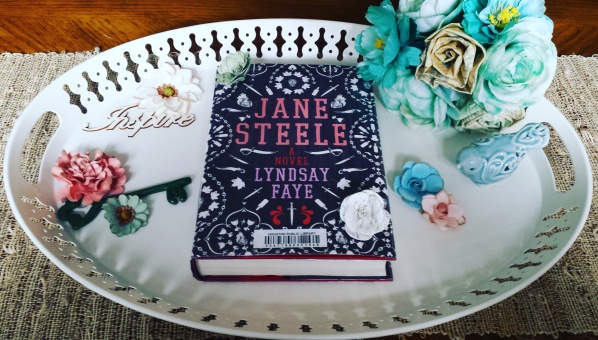 Last week was both daunting and exhilarating, between the flood and the readathon, I’m exhausted! After the readathon, I thought for sure I’d want a break from reading, but surprisingly not – I’ve been a reading fiend this week. Look out for more reviews on Monday! Currently, I’m reading Jane Steele by Lindsay Faye and finishing up the audio version of Pretty Girls by Karin Slaughter, what a page-turner. 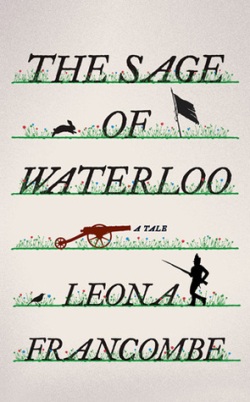 The Sage of Waterloo by Leona Francombe

The narrator, a young rabbit named William, is the protégé of his Grandmother Lavender, the beloved yet cratchity, and unofficial, sage of Waterloo. From their home, a farm in the middle of the historic battlefield, she teaches William how to read the ether, for great and terrible acts always leave a trace on the land, an impression all animals can feel even if they can’t yet read it. Filled with interesting tid-bits and battle details, amidst the everyday and surprisingly dramatic lives of the rabbits, Francombe’s novel is nothing short of a piece of art.

“A place of great conflict should bring on great reflection. If it doesn’t, all might as well happen in vain.”

“Life cannot be lived secondhand, William…No one can truly describe a dandelion, you must experience one yourself – even if it means taking a risk. And you can’t say you’ve really lived until you’ve taken at least one risk. Can you?”

Between their quirky mannerisms and mental exercises, William’s family is entertaining to say the least. Grandmother Lavender is constantly drilling him and his siblings to recite the facts of the battle, as well as their means of survival should they find themselves locked out of the hutch at night!  Her lessons easily make the novel one of the most quotable book I’ve ever read – stopping almost every other page in some chapters to take down a note. And if I wasn’t writing notes, I was thinking. The simplified tale has a way of weaving together incredibly complicated matters that surge the reader down a rabbit hole of deep reflection. What is the meaning of war? Why is it necessary? Can we avoid it? You can almost say I followed the white rabbit to Wonderland! 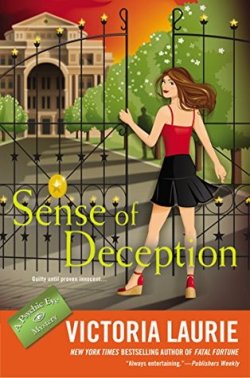 As per usual, Abby Cooper, psychic eye, has gotten herself in trouble. After insulting a federal judge in his own courtroom, she’s sent to jail in contempt. There, she meets Skylar Miller who’s on death row for her son’s gruesome murder. But instantly upon meeting her, Abby recognizes her defeat not as acceptance of her sentence, but the dashed hopes of an innocent victim. With Skylar’s final hearing days away, can Abby find the evidence she’ll need to prove her innocence? Or at least give Skylar the answers she needs?

Laurie’s Psychic Eye mysteries are my all-time favorite guilty pleasure reads. The main character, Abby, is a feisty psychic who solves crimes and falls for a handsome FBI agent. And like most crime solvers, she’s always in danger. From bombs to casino lords to two-face family friends….she’ll encounter it all. I’m not much on following a series all the way through, but I just can’t help myself with this one. Laurie publishes a new one almost every summer, and I have to stop myself from devouring it too quickly! And if psychics aren’t your jam, she has another series following a ghost hunter. 🙂 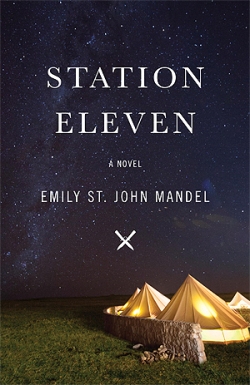 What would you do if the world you know were to suddenly end? Would you cry? Would you shut down? Would you go into a market on the eve and buy out their supplies? Would you walk until you felt safe? These are the questions that make Station Eleven such a compelling story. From the famous actor who’s kind to a little girl who dreams of his stardom, to the actor’s various ex-wives, to a once paparazzo who has both interviewed him….they are all connected, from the beginning of humans’ decline to the beginning of the new world.

“The beauty of this world where almost everyone was gone. If hell is other people, what is a world with almost no people in it?”

In the book, a pandemic reaches all corners of the earth. Those exposed to the disease are dead within hours. Where were you when the world stopped? For Kirsten, she was with her brother. Her parents missing, they walk. They walk until they can’t walk anymore, until she finds the Traveling Symphony. Now, fifteen years later, she’s performing Shakespeare for a town of twenty, moving from town to town, until a deranged prophet brings trouble to her new-found family. Spanning decades, the story sweeps elegantly between the before and after, until all the dots are connected, all the while exposing humanity from its grit to disorder. I’m so glad I finally joined the hysteria, because this novel is amazing. Even readers who shy from science fiction will love this epic tale of love and the nature of fame, a hero lost, and a new world found. 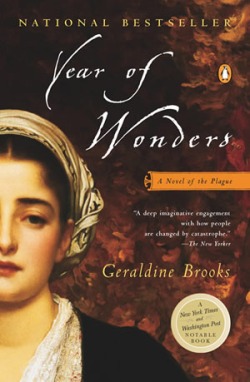 Year of Wonders by Geraldine Brooks

Year of Wonders is one of the most heartbreaking novels I’ve read this year. After an unsuspecting bolt of cloth is delivered from London to a small, isolated village in the English countryside, Anna Frith’s boarder shockingly takes ill and dies within the day. The cloth had been unknowingly wreaked with the plague, and is now being passed household to household, infecting everyone it passes. Anna’s home is affected as well, and she must find a way to carry on, to live, to survive. She’ll have to find a way to survive the villager’s mounting superstitions, their desperate witch-hunts, the loss of her children, but Anna is stronger than she knows, and only she is capable of restoring the year of catastrophe to bring a new age, a “year of wonders”.

No one man, no matter how wise or well intentioned, can never judge perfectly in all matters. That night, he erred, and erred grievously, and grievously indeed did he pay for it.”

The first signs of disease were from Anna’s own boarder, a man she cared for on his deathbed – this is the first gruesome scene of the novel. I can only say that Anna is truly an amazing woman, hard-willed, caring, strong. She is capable of so much more than she knows, and during the course of the novel, she discovers just that. I listened to the audio version of the novel, and I’m really glad I did. While there are many difficult passages, the narrator, Geraldine Brooks herself, immensely adds to Anna’s character. The narration begins hesitant, questioning and as the novel builds and Anna discovers her strengths, the narration becomes firm and knowing, bring her development to life. Unlike other reviewers, I thoroughly enjoyed the ending. While I don’t think her relationship with the rector fit with her character, her actions afterward most certainly do. For only in the end is she able to embrace her true gift, her ability to bring about wonders in the face of such destruction.

Above the Waterfall by Ron Rash

It’s Lee’s last week on the force. He’s finally entering retirement, handing in his responsibilities as sheriff to the small Appalachian town, but he shouldn’t have assumed his final days on the job would be so easy in a town plagued by poverty and crystal meth. Becky is the town’s park ranger, searching for a little peace to ease the pains of her past. In the midst of their relationship, someone has brutally poisoned the river, needlessly killing all the speckled trout that the town’s livelihood depends on. Neighbor will turn against neighbor as more an more secrets are uncovered, bringing them back together in the most unsuspecting way.

This is a story that could have happened anywhere, a small town wrought with havoc after it’s secrets and lies are revealed in the most shocking of circumstances. That it happened in the Appalachians gives the story an epic feel, making the short novel a truly compelling tale. Up at all hours during the readathon and desperate to discover the guilty, I could not put this one down! 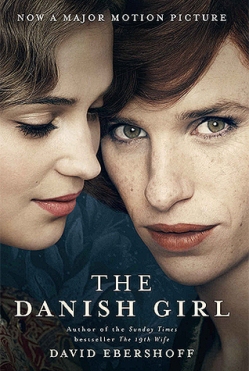 The Danish Girl by David Ebershoff

It all began when his wife, Greta, needed a model to take the place of her missing subject. It was a simple favor, wear her heels…and maybe a dress for an hour while Greta finished her portrait, she hadn’t considered the affect it would have on Einar. She could never have imagined it, his secret desires. The story that follows marks the death of Einar and the birthing of his alternate personality, Lili. As he struggles to contain her, she is basking in the joys of being a young, single girl, while Greta is left in mourning of the husband she deeply loved.

“The fox was chasing the mouse, and there was a distant voice in his head: the soft cry of a scared little girl.”

The novel, inspired by a true story, paints a delicate portrait of a strained marriage, what can happen when one person changes and the relationship crumbles beyond repair. It is, frankly, the first novel I’ve read with transgender characters. I had hoped it would help me understand their struggles, between society’s rules and their desire to change, for freedom, but I was only left with more questions. One aspect of her transformation was staunchly kept out of the story – I find it hard to believe she didn’t encounter more backlash, which was surprisingly confined to one or two persons, mainly Einar’s doctors. I don’t think it was the most realistic story, and I most certainly think it was written in a way to squash Greta. I so wanted to feel for her, but the tone, the way Ebershoff strung the words along, it was all for Lili, while Greta is painted jealous and callous, dragging her heels at the sign of change, when really, she’s lost her husband and will always have to witness her new partner chasing after other men. For this reason, there just wasn’t enough character development for my liking – perhaps the movie will be better.