Typically, I share a book haul once per season, saving all my purchases for a massive post of bookish delight… but a few recent purchases just couldn’t wait! 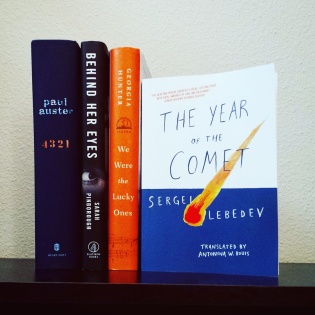 4321 by Paul Auster: I finally got my copy of 4 3 2 1 in the mail! I’m not sure when I’ll get to it, considering the length, but Auster’s innovative work is sure to be a hit. Archibald Isaac Ferguson is born nearly two weeks early on March 3, 1947 in Newark, New Jersey, but from a simple beginning comes a story of four “simultaneous and independent” Fergusons as four copies of the young boy lead very different lives after leaving the hospital.

Behind Her Eyes by Sarah Pinborough: Thanks to Target Cartwheel, I got this one for free! After meeting a handsome stranger at the bar, Louise gets the shock of a lifetime when she discovers he’s her new boss the next day. Of course the drama heats up when she not only meets his beautiful wife, Adele, but the two become friends. A love triangle in the purest fashion, Behind Her Eyes will keep you guessing until the very end!

We Were the Lucky Ones by Georgia Hunter: Mentioned by just about every blog I follow, We Were the Lucky Ones is the latest and greatest World War II novel that everyone is reading, following a family of Polish Jews who are separated at the start of the war. Each struggling to survive and driven by the fear of never seeing their family again, the family relies on hope and sheer tenacity to persevere.

The Year of the Comet by Sergei Lebedev: A coming of age story set in the Russian suburbs during the Soviet Union’s collapse, an idyllic childhood scene turns perfectly sinister as rumors of a serial killer spread throughout the neighborhood. From the changes in Russia’s political climate to the terrifying possibility of a killer on the loose, The Year of the Comet is definitely my most anticipated release this month!

What books have you hauled lately?

3 thoughts on “[Filling the Shelves] A Mini Book Haul”