October was a crazy month for me, especially in my reading. Between a growing TBR and almost daily emails from the library alerting me to ANOTHER book available for pick up… I ended up with too many books and too little time! It was complete chaos! How are you supposed to choose ONE book to read, when you can switch between ALL the books!?

But of course, with so many books in queue, there’s bound to be one that, no matter the hype, fails to deliver. 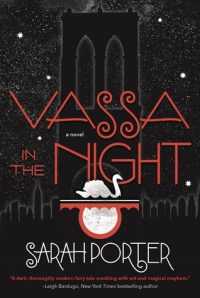 Vassa in the Night by Sara Porter

Vassa in the Night gives the Russian fairy tale Vasilisa the Beautiful new life. Retold in modern day Brooklyn, Vassa has one last gift from her late mother: the magical, tough-talking, kleptomaniac doll Erg. Together, they’ll need sharp wits and a cunning ferocity to break the witch’s curse and save the neighborhood. Full of secrets, wondering hands, and magical curiosities, Vassa was full of promise but short on delivery.

Vasilisa the Beautiful is, in itself, a strange tale, but Vassa in the Night is decidedly too strange. Much of the novel is based on the original fairy tale – her family runs out of light bulbs and sends Vassa to the corner store, conveniently owned by a witch who hires a couple of hands (literally a pair of hands) to frame customers as thieves (whose heads she uses as decorations out in the parking lot). Even Vassa’s dad fits the fairy tale to a tee, abandoning his family for his life’s dream to become a dog. No matter how she retells it, Porter’s novel is bound to be weird, but perhaps she should have altered the story more.  Overall, the modern setting and Porter’s average writing left me underwhelmed and unable to suspend my beliefs for more than a page.

Did you like Vassa? What books have you given up?