This month has lasted FOREVER! Between looking back on past readings so far this year, and then ahead to upcoming releases to finish out the year, June is almost doomed to feel extra long – not to mention the general business in actual life this month. That said, July has a lot to live up to right now!

Dallas was an amazing city to visit – so much to do and see (and eat!). The picture above is from the Wild Detective, a local bookstore – bar – coffee house combo of pure heaven. If you’re in the neighborhood, you gotta check it out! Later, we headed to the Dallas World Aquarium where we met the little critter below. You guys, they have sloths at just about every corner! 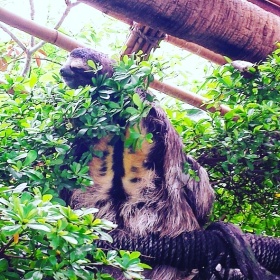 The obvious stand out read of the month is, of course, A Court of Mist and Fury  by Sarah J. Maas- this could easily be my favorite read of the year! For those who haven’t ridden the ACOTAR train yet, it is so much more than your average young adult fantasy series. Feyre is a bad-ass leading lady, though emotionally vulnerable after years of poverty and starvation, she’s incredibly smart and courageous enough to follow her own inner voice – whether it leads to trouble or triumph.

For my least favorite, I think I have to go with Rebel of the Sands by Alwyn Hamilton. I know, I know, how is this even possible!? But, honestly, the novel didn’t live up to expectations. It read like a badly crafted spaghetti western from the very start, something I couldn’t shake as the story slowly shifted from gunslingers to genies (and then back to more gun-slinging). The mix of cheesy western culture and the Middle Eastern mythology distracted from the core story, which I totally expect to be better explained in the coming sequel. I need more of a backstory for this crazy new world!

Now to the July releases!

There aren’t too many releases that peak my interest this month, so hopefully this will be the chance I need to take on my TBR list and knock off a few long awaited reads. (like The Nest!)

A World Without You by Beth Revis: July 19th

From publishers: “A painfully brilliant and transporting read. This novel has the rare superpower to change and save lives.” Bo isn’t a normal kid, he has the ability to travel in time, but when he finds himself on a Civil War battlefield surrounded by bodies, the gift becomes too much to bare and his parents reluctantly send him to Berkshire Academy for the gifted. However, nothing is at it seems, and when Bo befriends a troubled girl at the school, he’ll have to come to terms that he is not at a school for the gifted, but for the troubled. The novel has received several poor reviews on Goodreads, but the premise is absolutely intriguing, especially after reading Challenger Deep by Neil Shusterman. (384 pages)

It’s July – and that means a new installment of my favorite guilty pleasure, the Psychic Eye series by Victoria Laurie. This novel follows Abby Cooper, psychic eye detective, to San Diego where she’s leading a class to train FBI agents to use their intuition – an already impossible task. But, when putting the class to action, her intuition leads not to the bank robbers, but to buried potter from an American Indian Tribe, her credibility is tested to the max. Can she solve the mystery before it’s too late!? (320 pages)

Huzzah! There’s a new Harry Potter book! I loved going to the Harry Potter premier nights at my local Barnes and Noble, and now we can go as adults! Though be warned, this is a play, not a novel. Harry, now an adult, is overworked and overlooked as a regular ol’ employee at the Ministry of Magic, trying to raise his children the best he can without letting his past overshadow his future. Meanwhile, his youngest son Albus is just learning the ways of the world, discovering the hidden truths behind dark magic and its shocking origins. (320 pages)

What will you be reading this month?