I’m so glad last week is over – what a drainer!  Between work, getting my car back, dealing with the rental company, and still catching up on last week’s chores….. man, I’m tired. But, thanks to some good planning, I’ve had an amazing selection of reads for the week. There’s nothing like coming home to a good book or zoning out on your lunch hour – just completely disappearing in the pages of a great story! Perhaps that’s why I’ve been gravitating toward thrillers so much lately – I can completely escape reality, just let myself get swept away by the mystery and pure adrenaline of the characters.

I already have a great batch of books lined up for this week too. Book haul coming soon! 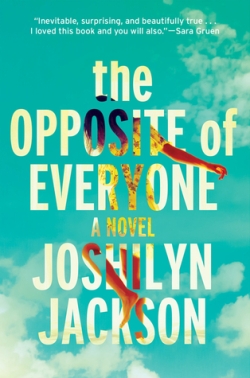 The Opposite of Everyone by Joshilyn Jackson

Paula Vauss is a high-power divorce attorney. Successful and cut throat, nothing can stop her, that is until her monthly check to her estranged mother is sent back…with a message. The first words she’s received from her free spirited mother in years, bringing news of her illness and a journey. Thrown in shock, Paula recounts her chaotic childhood spent on the road with her mother moving from town to town with each new boyfriend and filled with tales of Hindu mythology. With the help of her ex-boyfriend and in-house private eye, she’ll discover her mother’s deepest secrets and uncover a far greater debt than she ever imagined. Will she find her before it’s too late? Can you begin again?

“I had spent my whole life hungry for forgiveness. It had not come, so I didn’t know firsthand what he was feeling. But I had imagined it, over and over. I’d wanted it so bad. I’d wanted Kai—or anyone, anyone who knew the worst in me—to say that I was still dear, and good, and worthy.”

This novel took me by surprise. At first, I couldn’t figure Paula out – she’s tougher than dirt and yet so vulnerable, always looking for approval from anyone and everyone. But as her story is slowly unveiled, her nomadic years on the road, her time in foster care, her guilt… it all makes sense. She makes sense. That said, I did have a few issues with the novel. I’m still not comfortable with the fact that Paula felt entirely responsible for her mother’s imprisonment, she was a child and was not being cared for properly, and was their own fault for growing pot! Sure, she didn’t have to call the cops on her mom, but SHE WAS A CHILD! I understand it was a great plot device – her guilt was ultimately her saving grace after all those years in foster care, it’s what kept her humble and hungry for redemption, but she could have cut herself some more slack. Then there’s the ending. It feels rushed and unsure, taking things from it’s complicated to happily ever after in record time. Everything is resolved in a neat little box, but it’s resolved separately – each plot line summed up in it’s own way, while the weaving of all her stories could have been carried out to the end. How will Birdwine fit in with her new family? How is she suddenly fixed out of nowhere? I need to know!

Salt to the Sea by Ruta Sepetys

In the midst of World War II, four teenagers are trapped in the wintery snares of East Prussia, desperate for a passage to safety. The way to the coast is long – they’ll have to brave extreme conditions, avoid their Russian “liberators” and cross treacherous ice-covered waters.  But as the number of refugees steadily increases to the thousands, a place aboard the Wilhelm Gustloff, one of the few remaining ships, will prove just as difficult as the passage itself. Every inch of space filled to admit as many refugees and injured soldiers as possible, the ship is beyond it’s capacity by thousands, resulting in catastrophe when a Soviet submarine approaches. Each with a secret and a family to find, they’ll band together for survival, but who will live to tell the tale?

“Two warring nations gripped Poland like girls fighting over a doll. One held the leg, the other the arm. They pulled so hard that one day, the head popped off.”

The novel highlights one of the greatest maritime tragedies in history. With the destruction of the Wilhelm Gustloff, an estimated 9,400 souls were lost to the icy waters of the Baltic. Constructed as a cruse ship for the Nazi party, it was meant to be a luxurious escape for it’s 1,500 passengers, but in the winter of 1945 it served as a hospital for the wounded before taking its last voyage carrying civilian refugees and the wounded. Sepetys’ characters were a few among the many aboard, fighting for a spot on one of the few life rafts available. Not only an amazing historical work, the novel is a thrilling adventure – a story unlike any other war-time novel I’ve read. The four characters, a Lithuanian nurse, a German soldier, a Polish girl, and a Prussian on a mysterious errand, alternate the telling of the story. Each chapter told by a different character and no more than 2 to 3 pages long. The effect is overwhelmingly personal and thrilling. I instantly felt an emotional connection with them all, hoping they’d make it to the end together. My mother’s family is from Poland and Western Europe, and while much of our family had already crossed to America by the war, many of our remaining family members were lost to us those years. I can’t help but wonder if they walked these same forests? Did they suffer the same way? Did they escape? For many, their fate will never be known to us, but I’m thankful they have a voice in Sepetys’ stories, a beautiful remembrance for all.

Wink is the quirky, mysterious girl next door with wild red hair and a bookshelf full of stories. Poppy is the golden hair beauty, ruling the school with her mischievousness. Midnight is the shy, thoughtful boy caught between the two. Who is the hero? Who is the villain? Who’s keeping secrets?

“Revenge. Justice. Love. They are the three stories that all other stories are made up of. It’s the trifecta.”

“For your sake I have braved the glen, and had to do with goblin merchant men. Eat me, drink me, love me. Hero, Wolf, make much of me. With clasping arms and cautioning lips, with tingling cheeks and fingertips, cooing all together.”

Tuchoke’s writing is beautiful and poetic, but lacks substance. The story follows the troubled woes of youth who have nothing better to do than stir up drama where there isn’t any, all the while believing themselves to be some grand character in a fairy tale. Of course, you’ll be pleasantly charmed by layers of mystery and prose before coming to this realization, but by that time, you might as well finish. Otherwise, you’ll miss the over the top, melodramatic séance as well as Poppy’s laughable self discovery (leading her to give up society to live in the woods, hoping her knight in shining tie-dye will return). The only one to learn something out of the whole debacle is Midnight, who finally finds his voice and a way to fix his family, from a rift about as wide as the Atlantic Ocean and no more. The real mystery is how they manage to have this much time unsupervised? Don’t they have dinner or curfew or something? And why is Poppy so obsessed with Leaf? I understand he’s the one person she can’t win over, but couldn’t she have at least had some grand epiphany at the end? Some kind of growth showing she can move past her superficial attraction for him in exchange for self respect? And poor Wink…she’s right back where we met her in the end. So much for strong leading ladies.

One thought on “Weekly Reads: Week 19”